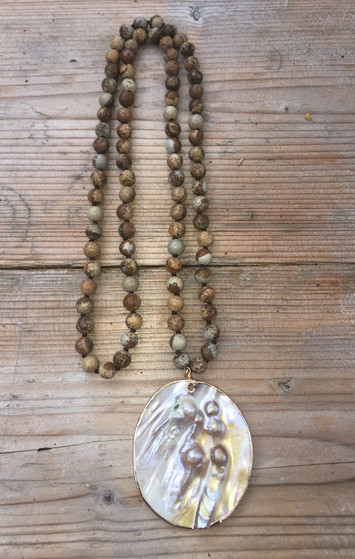 Jaspers have been revered by ancient peoples and civilisations throughout the world as sacred and powerful stones of protection, for both the physical and spiritual realm. They were known as the “rain bringers” and nurturers, healers of the spirit and stones of courage and wisdom. The name can be traced back in Arabic, Persian, Hebrew, Assyrian, Greek and Latin, and the virtues of Jaspers have been extolled throughout the ages by the most noted physicians, magicians, poets, scientists, lapidaries and scholars.

Highly attuned to the Earth’s electromagnetic fields and energy systems, Picture Jasper provides a remarkable ability during meditation to merge with the consciousness of Earth. It allows access to the vast records stored within the planet’s mineral data base, and may be used to view the world’s history and connect with the energy of sacred sites and ancient civilisations. It encourages ecological responsibility, and acts as a reminder that one is not here on the physical plane simply for oneself, but to bring joy and substance to others.

A nurturing, protective stone, Picture Jasper brings comfort and alleviates fear, stimulating not only the Base Chakra in providing physical and spiritual energy for the body, but also activates the Third Eye Chakra enhancing visualisation. It instils a sense of proportion and harmony, enlivening one’s creativity and initiative, and is a marvellous talisman for bringing hidden emotions to the surface for healing.

Mother of Pearl is a powerful and very symbolic stone. This symbolism is because of the stone's ability to attract wealth and generate a better income for whoever wears the stone! ... Besides attracting money and good fortune, Mother of Pearl also symbolises good luck and prosperity.